I wrote this mid October 2016, but thought I would add more to it and never did. It is probably fine as is, though I don’t know if it is really relevant at this point.

I marked six months since settling back in Pittsburgh from Detroit. On my first long ride in that time (relative, I know, but truly, except one impromptu overnight out to a campground on the GAP trail about 25 miles out and back in the morning, I have hardly done more than commute) I rode from southwestern PA to southeastern MI for Bike!Bike!. Which is to say, mostly through Ohio.

My friend Emily spent the summer biking around Europe, and returned wanting more, and to my surprise actually followed through on joining me for this ride. We set out when I got off work Saturday, September 24. We found a nice camping place about 20 miles out, it was already well dark. The next day was lovely for us, and we ended it in West Branch Park, with many hot air balloon sightings. We nervously set up camp in the picnic area after a fine supper. Excellent stargazing. The next morning some clouds had rolled in. We were on trails a bit of the day, and were joined by some rain. I forget how much weather can affect mood out there, and we found ourselves a bit grumpy until the sun came out mid afternoon. The remainder of the day was joyful. We saw a cat hit by a car and stopped to look for it, unsuccessfully. Not finding a great camping spot, we asked a stranger somewhere before Wakeman, OH. They agreed to let us set up in their back yard. The best stargazing yet, along with some fine (not to boast) camp stove peanut noodle soup, and only good conversation and into bed long before you fine folks were done suffering through the first presidential debate.

My travel buddy Emily, not long after we crossed into Ohio 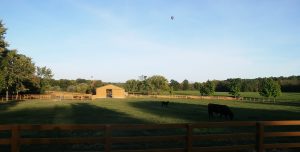 Towards the end of our Sunday we saw many hot air balloons. The little cow in the dark foreground was peeing nearly the entire time we stood watching from this place.

The sun was out all day Tuesday, but the wind was fighting us with some seriousness. We were on rail-trails most of the day, but it was slow going. My friend Danielle lives in Toledo, and we were planning to visit that evening. After a rough day, including losing each other for a half hour or so, I called Danielle to check directions and, still about 20 miles and only a half hour shy of sundown, she offered to come meet us in the car. We went a little farther before pulling off in what felt like an easy spot to be found and waited. This should not have been an interesting story… but cops. Danielle pulled into the wrong place to look for us, and once we figured out why we weren’t in the same place, she did come get us. We packed up our persons and things, and started in towards her home. She’d brought her roommate along, and he commented as we were heading off, I wonder if that guy called the cops. Not more than a few minutes later we were indeed pulled over, ordered out of the car (at gun point, the cop made sure we knew) and interrogated. Though we “didn’t look like your stereotypical burglars” he had to be safe. The story got straightened out eventually and after an hour or so we were allowed to leave. What if we had looked different?

We left Danielle’s house into a chilly rain. The ride north was relatively easy, and pleasant in spite of this. We made an excellent lunch in the late afternoon, got to Detroit as the light faded for the day. Began checking in with old and new friends from all over, a wet few days of catching up and learning and fun. Sunday, Emily and I were discussing how we weren’t quite ready to leave… There were several people from Pittsburgh driving home, all leaving shortly after the final meeting, with room for extra people. Though it isn’t too hard to get home other ways, this would be the easiest. I took one, and though Emily was taking another, though turned out she stayed on another week.

Our bikes outside a gas station. I built a bike at Free Ride for this trip, which lives in Detroit now. I taped a plastic bag to my stem to hold the cue sheet.

I spent just a week away. Back to work. Back to house. Back to The Big Idea and to teaching at Free Ride. And hosting! for the first time I was asked to host cycle tourists! Two separate people contacted me, for the same day, actually, and so I ended up with three visitors last night, which was fun. 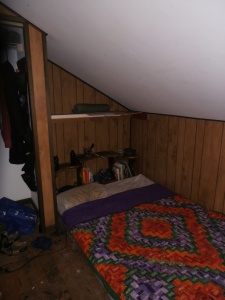 It gets very dark in this corner.

I live with a cat named Puddleduck. 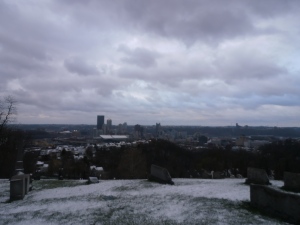 View from the cemetery up the hill from my house