Some places and people and things so far

Ok, I’ll try summarizing the trip so far, but it will probably be too long of a post to be interesting to anyone. I am tired, so this may be even especially extra rambling and unedited. We’ll just try it…

My first day was all familiar territory. In fact I left with no directions, figuring I’d enough idea of where I was going to get into Toronto… That said, I was pleased with myself for actually remembering all the turns to get up around Moraine where I got on 19. Second day had rain, and there was an increasing amount of snow on the ground as I went north. I got into Erie and happened to be right near Leo’s place when I thought to check warm showers for a place to stay that night. I called and he welcomed me over. Spent the evening with him and Bonnie and his dog Buddy. Leo has done a bit of touring and had some solid advice.

Getting to Buffalo wasn’t hard, just stay on 5, follow the lake. I did get a little confused when I got there, getting to an actual specific place in the city, but didn’t take too long. I was staying with Nora and Carrie, who were both lovely. Nora was rushing about and was in a new band project and working a lot and napping. Carrie I quite like. She got me excited about farming projects and house rehab work I’m glad I got to hang out with her for a bit. I did go by GO Bikes community workshop, which is squatting an old police building, and Burning Books. Chech out their nice kids area: 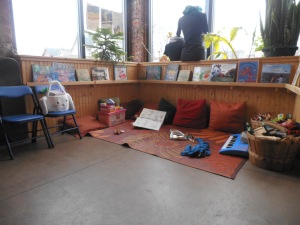 I think I wrote about crossing the border already? Well it was foggy. First order of business (after they searched my person and name and decided to let me into Canada) was getting off of the QEW and figuring out what was the best roads to be on. I mentioned I had a plan? it went something like Go north till Lake Ontario, then follow the Lake till you get into Toronto! With some advice from the few people I could find through the fog who were out on this “holiday”, and managed to purchase a map and text message instructions solicited from Kathleen, I got somewhere.

Kathleen had directed me to the canal side trail starting in Port Colborne, which I did find, though found to be a bit tricky to get on it. After a while another trail user waited up for me, which was super helpful as I would have been lost at that point. He rode with me a while and guided me through a few other poorly marked path shifts. He got off in Welland and said I should be fine from there. I picked up another trail friend when I stopped to snack later, who rode the rest of it with me, a difficulty for him perhaps due to my generally low speed. He also let me stop at his house when we got to St. Catherine’s for a pee break and snack and to look up places I might stop eventually that night. He even traded me some currency and showed me how to get back on route. And brought up travel health insurance, not something I’d thought of, and should probably do something about before I go back to Canada.

I made it into Toronto and found Kathleen’s house, in spite of the poor directions I’d written for myself. Toronto is big, but such a mix of commercial and residential and sprawl that it doesn’t feel too overwhelming, I think. There are many parks and bikes. I rode some street cars, I like them, though the tracks for them everywhere are a little scary. Sunday morning Kathleen and I rode out to the Leslie Spit. There is a lighthouse and birds and many piles of building materials that wash up on shore and lots of speed bumps. It was a lovely ride, though got cold and snowy on the way back. After a break inside and a snack I went out again. Visited Bike Pirates, cleaned up my bike and hung out with Ainsley and helped people do bike things. Later Raymond, who maybe I had talked to before, suggested squirting water at dogs that give chase. I haven’t been chased by any yet this trip, but I know it is just a matter of time so I’m glad to know this tip. 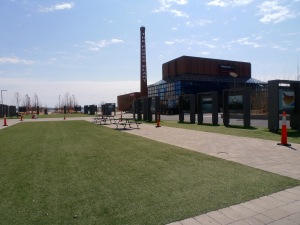 I went to The Power Plant, a contemporary art place. More on the exhibit later. Also next to it was this yard with photo exhibit 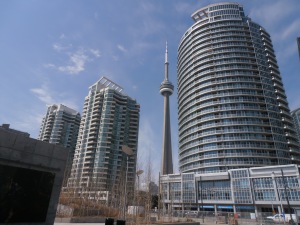 These are some buildings 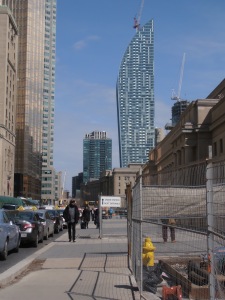 There are currently many construction in Toronto

I felt like all over Ontario the streets were cleaner and generally better respected than I am used to. I was more on edge with my riding behavior- I generally aim for safetly, but I just felt like there was a higher expectation of courtesy. There seemed to be better acknowledgement of bikes in general. Even in rural areas I found bike lanes, share the road signs, safe passing distance signs… It was neat, is all. 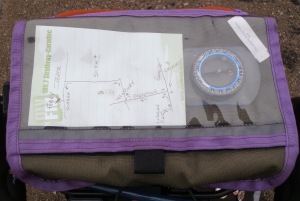 This is a map that was drawn for me. There is pretty much nothing between here and Sombra, I was told. This was true. 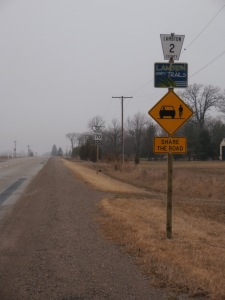 It was a lovely mostly empty road, though

I took the Bluewater Ferry into Michigan. Both Sombra and Marine City are quiet (though Sombra the more so) towns, so pretty chill crossing. I was asked many questions at the border again, and I started to feel defensive, though afterwards I decided they were probably just actually curious, afterall, I was reentering my own country, and even if I’m not from Michigan, and even if I’m on a bike doing something silly, I’m pretty sure I’m allowed to be here. 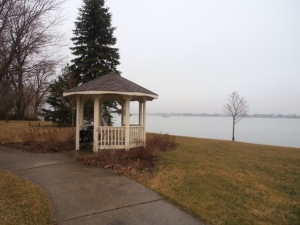 Little park in Sombra where I ate lunch annd watched birds. They were too fast to photograph, though-sorry, I am impatient. 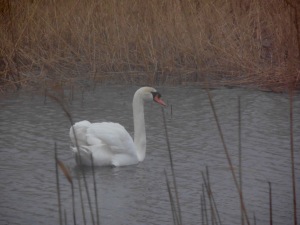 First impression: Michigan is a swamp. Beside the road is a marsh stream with frogs and frogs and ducks and swans. Also lots of fog. And many frog noises, probably from the frogs

I got really lost coming into Detroit. Not for any good reasson, I glanced at a map before setting out, and wrote myself directions, but then didn’t follow them. It should be no surprise that not following directions led me somewhere other than my destination… But I made it eventually. Over the next two days I rode around and pieced together a mental map of the city a bit and it is much less intimidating. The places I rode by  several times that first night don’t even seem so far away now maybe. Kyle has been a great host, and i’ve met many other great people. 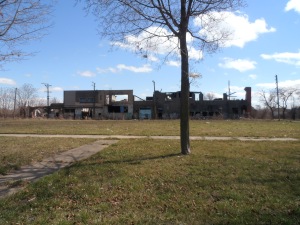 There are a lot of abandoned and deteriorating buildings here. It can feel sad and nostalgic. We do this thing, culturally, maybe, where it is hard to let go of how things were, and think only about what was lost. I try not to do that, I prefer to focus on now, or the past as it was in its time rather than how it isn’t still (this applies to many things) and can get caught in the optimism that is potential. This can also be problematic, of course, when the actual potential of vast resources gets snatched up into only a few hands or otherwise isn’t realized. Potential is a transient state. The problem with a vacuum is it can go any way, easy to think of cool positive things that can be done, but it is just as likely (in truthe, unfortunately, more likely) that those who already have will be the ones to grab and will do what they will. Buy up all the empty space and wait for someone else to do the work so it will be worth doinng something with eventually. 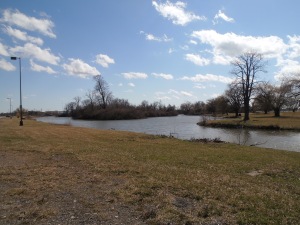 Belle Isle is an island with a pond with islands 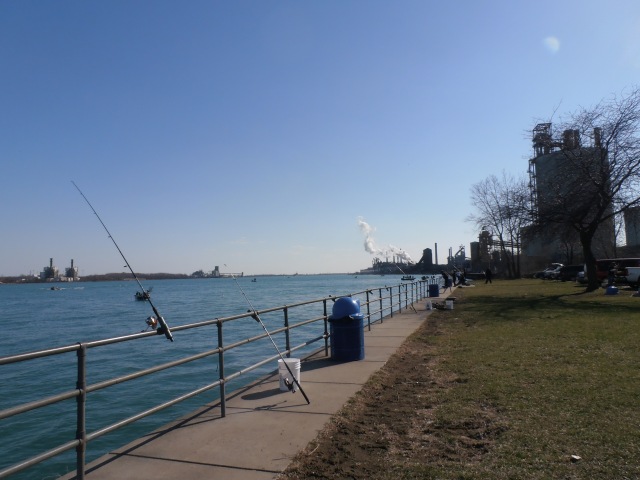 Ok? This was a lot here all at once, huh? Back on the road tomorrow so we’ll be back to sub160 character posts for a while.

5 Responses to Some places and people and things so far