Walking and biking, my first two weeks in Guadalajara

I tend to start cautiously in new places, especially big cities. This means walking instead of biking as I get my head around the layout, and listening a lot as I meet new people. I like walking because it is slower and feels less intimidating as I learn streets. It only took about a day and a half of walking here before my feet hurt and I gave biking a try. It has not been so bad.

Most streets are one direction, narrow, poorly marked, and it can be hard to know which direction has right of way in a given intersection. Traffic can be tricky to navigate but overall I haven’t found riding to be so scary. 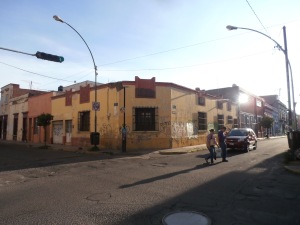 except for a few large road intersections, most sreeets are marked on plaques on the sides of buildings, if there is one, and some are clearer to read than others. 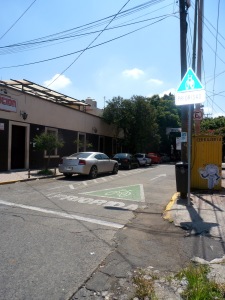 many streets are marked for bikes, which may mean something.

and usually when there are large holes in the road they get marked.

Trying to cram a functional vocabulary and set of grammar rules in on top of getting my head around a new city and meeting so many new people whose faces and names I should remember how to connect is a lot… Maybe I should have come earlier, but I think it is getting easier. I had many days in the first week that I was exhausted pretty early. My Spanish was improving until bike!bike! at least, which has filled my life with English speakers and more complicated stuff to try to hold in my brain and not sleep.

people come out and play

and ride in the road. lots and lots. most maybe never ride otherwise, but it is a start. and lots of fun

This is already now the longest I’ve been in any place in half a year. I’ve mostly been in town, helping in the bike shop, and learning… I’m thinking I will stay here for a bit longer, but I’m not committed to anything yet. Off now for a short adventure with some bike!bike! folks.

2 Responses to Walking and biking, my first two weeks in Guadalajara