A little more of Jalisco

Someone I was talking to recently mentioned that learning a language feels like acting. And I think about that a bit. It is a lot like taking on a character, learning to talk like other people, and until you can internalize it and stop needing to think about every word (I’m largely past thinking about every sound at least!) it is hard to make it your own. Sometimes I feel like I’m doing it, and other times I am totally faking it. Often I just listen, but I’m working on saying more. It is interesting to think about saying things that I can know mean something but have to work to put together, which to the recipient comes naturally full with meaning.

There are actually a lot of people who can speak English better than I can Spanish, and I sometimes try to avoid them… Or at least the ones not patient enough to let me stumble through. I can, of course, and do when I’m on my game,try to respond in Spanish. The folks I’m staying with are good examples of people who know a bit of English but are happy not to use it. I’m renting a room from my new friend Citlali, who has a roommate who stays most of the time with his boyfriend anyway, and was ok with letting me pay his rent for a month. The house is lovely, close to places I want to be, super open (to outside), and the remaining folks are good to hang out with (and tolerant of my limited vocabulary). 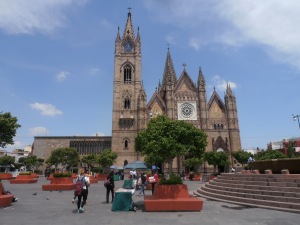 Plaza Expiatorio, near where I’m staying, always has things going on, though Sunday nights are the best. Lots of food, much of it vegan, craft vendors, music and dancing…

I think I heard someone say they were trying to learn their way around the city by the cathedrals… which is absurd unless you are especially detail oriented, there are tons! This is the central one?

Bike!Bike! is an annual gathering of folks from community bike shops. Each year one group (or city, if there are multiple projects in the same cty they probably work together) volunteers to host. This year it was here in Guadalajara, which is how I decided to come to begin with. It was nice to come early and help getting ready and learn the city a bit. This was my third Bike!Bike! (a silly name, I know) and was a decidedly different experience for me, mostly because I’m not actively deeply involved in a community bike shop project at the moment. I think about them, and they are still important to me, but I felt like I had less to bring and take from discussions this time, and it all felt a bit distant. Bike!Bike! is a great time, lots of people from all over with this one thing in common, sharing what they do the same and differently, what works, what has failed, what they want to try. And lots of partying-most people don’t sleep much-and I participated in more of that this year than I have in years past (maybe I’m not getting older?). It is a weird time for me, and I sometimes felt distracted by my lack of plan for the future, but tried to keep that in check and remember the kind of experiences I’ve had here in the past and how excited everyone else is. 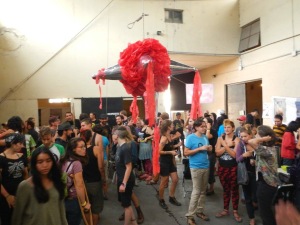 This is a picture from the end, which Mario took and I have stolen, of folks milling about after the closing meeting, before the piñata time.

Approximately two meals/day are organized, and though some folks tend to stay in the kitchen the whole time, lots of people end up volunteering a shift or two. 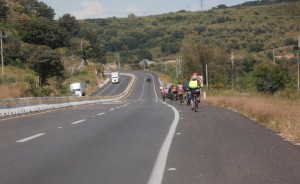 One of the locals organized a trip to Tequila for after, which twenty people hung around to go on. We set out on Monday for a 65km ride, with many stops, through Jalisco.

lots of bike mechanics on bikes that are prone to failure. Some of us had our own bikes, others were on borrowed, hastily repaired steeds.

Agave fields all over!

We got into town as a quick rain storm started. We had a hostel to ourselves (it would normally be closed) and Tuesday we went for a hike and swim. 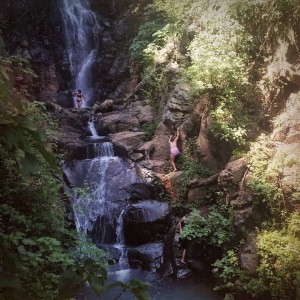 Some people came back earlier, there is a short bus ride that takes you most of the way, but about half of the group rode back Wednesday morning. Though the way there is mostly downhill, the way back proved a bit smoother of a ride, with a smaller group and way fewer mechanical problems.

for now I’m back to just exploring this huge city, trying to talk to people, and working on bikes (I’m picking up some tricks there, too!) which is maybe good, to learn the words around something I know pretty well. 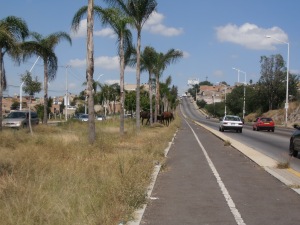 Sometimes there are horses in the street.

But sometimes they are just states of horses. All over the place there are these markers, some have information about where you are, some have maps and estimated walking and biking times to other places.

I took my pants to get fixed. I did this because they were broken (worn out from riding in them too much) and also because maybe it is good to put myself in places where people will ask me questions. It turned out to be pretty easy, I’m not sure I actually used very many words, but I did get what I needed. For $70(peso) someone did an excellent job of patching and shortening them, so I don’t even have to fold them up anymore.

1 Response to A little more of Jalisco