Tomorrow was a bit of a stretch…

Tuesday I had a short ride to Chalmita, where I am staying on a farm, WWOOFing for a bit. I also had my first road stop inspection! I answered all the questions well enough and my could find both identification I have, and they allowed me to carry on. I am in a beautiful valley place with lots of fruits and vegetables. I work a bit and hang out and talk to people and eat many things. Still getting the hang of the routine here, more next time. For now, some pictures from the last few weeks:

I stayed, in Guadalajara, six weeks in part of a house that I did not need the key to leave but did to reenter, in a house which did need the key to leave. I am very pleased with myself for not once forgetting my keys and trapping myself between these doors. In my last bit of time in Guadalajara I explored some more of the city, finally got to Tlaquepaque and Tonala; got and applied new connectors for my rear light, which had stopped working; was the second person on a bicycle, which was scary, but so common here that I’m sure it was an important thing to try; and probably some other things which are or are not worth mentioning. I was starting to feel restless. There is a lot of cool stuff going on in Guadalajara, and many people I like a lot, and much I was only just getting to know, but that will be true everywhere. I left feeling a sufficient mix of well liked and appreciated, unimportant, and encouraged to go. 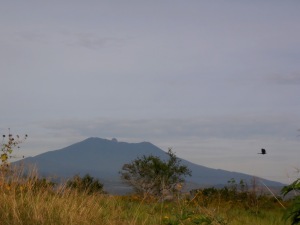 I set out without knowing exactly where I was going. I planned a few days out, from which I could connect to a few potential routes.

First stop: Guachimontones! An easy (65km, mostly downhill) ride from GDL. The archeological site is just uphill from the town of Teuchitlán 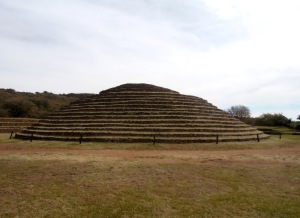 These are, I believe, the only circular pyramids in the world. It was good to visit, it is important to think about what is left behind, how civilizations change. 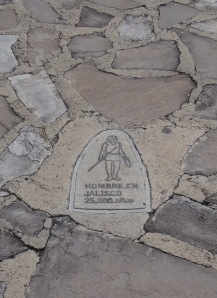 It is neat to think about the time scales on which we move, and the general nomadlyniess of our species.

The second day had a lot more climbing. It was sunny and hot, And I felt a bit out of practice for travel. I stopped in Union de Tula in the afternoon, which seems like a lovely town. First thing when you turn off the main road into town is the Casa de la Cultura (where there are dance, music, art classes, theater rehearsals, etc). I talked a while with a guy in the office there, who let me take some water, told me I could camp there, and gave me some route advice. 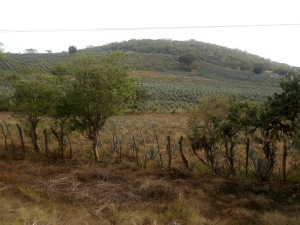 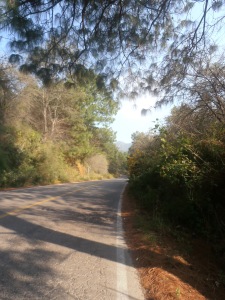 decided to shorten my original route, and headed for Ciudad Guzman. This is one of many views that reminded me how similar so much of the places i have been can be. I get flashes periodically of other roads I have traveled, people I’ve met, roadwork I’ve waited to pass through… 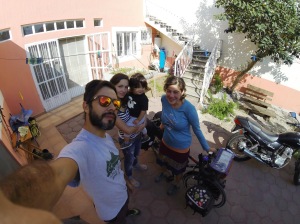 In Ciudad Guzman there is one person on Warm Showers-who wasn’t around, but connected me with some of his friends, Gerardo, Gina, and Mathias 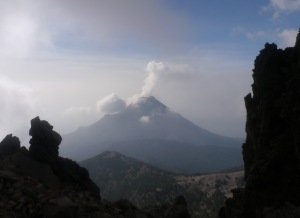 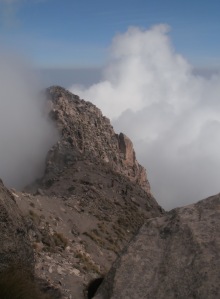 A farm project I’d been in touch with is in Concepcion de Buenos Aires, which happens to be only about 100km south of Guadalajara. I hadn’t heard back from the guy in a while, but decided, since it isn’t so difficult to get to, or far off the route on to other places I want to go, to stop by, at least visit and check out what they are doing… As I got into town someone stopped to talk to me, and invited me for dinner. He later accompanied me to the Presidencia (municipal sort building) where I asked and was allowed to sleep. Someone who came in later, who works sometimes in town something government and was also excited to talk to me insisted I go to the hotel on the corner. He was also staying there and paid for my room in spite of protest. I accompanied him to eat, though had to explain repeatedly why I wasn’t hungry. We talked about many things, (traveling and a real answer to why I am out here, problems in the world, etc) and I felt really good about my Spanish this night. Turns out the guy from the project here was in Guadalajara then, and I was feeling impatient so moved on. 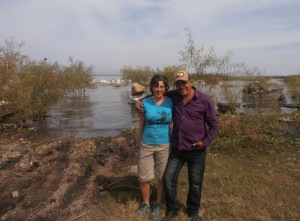 On my way out of Concepcion de Buenos Aires, after only 15km or so, I met Santiago, who I hung out with for a little while, joined for an early lunch. I let him show me around a while, and eventually insisted on moving on. 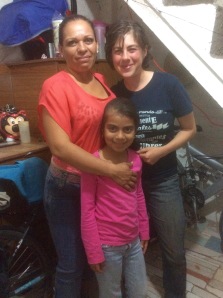 Maybe 25km on from where Santiago left me I met Cuca, Who suggested I’d be better off calling it a day and coming home with her than aiming for the city coming up. She loves walking, and I met her mid route and walked with her a ways before heading back to the town I had only just taken a rest in. I met some? of her kids and grandkids. They spoke fast and I missed a lot-it is hard with multiple people who are talking amongst themselves and also to me… But they were inviting and generous none the less. 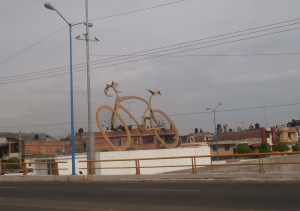 I don’t know anything about this, actually, but it is in Zacapu, where I ate breakfast with some people one hungry morning. 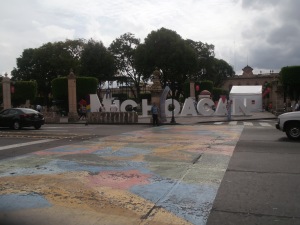 I made it through Michoacan unscathed. I got into Morelia relatively early last Thirsday, stayed all Friday and explored much of the center.

I like Morelia, it was a nice city to enjoy being in for a minute while taking a day off bike. 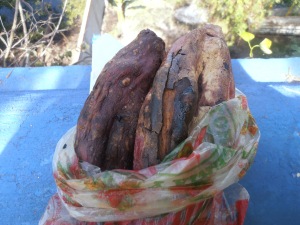 Camotes! In addition to sweet potatoes, stands along the highway can be found offering coconuts(cut open so you can drink it, then more so you can eat the flesh as well) and plantain chips(and of course tacos) 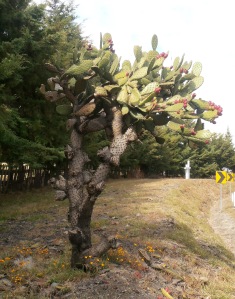 Sometimes cactus turn into trees. I stopped to eat a fruit here, and was reminded that it isn’t the big spines you need to worry about… I was pulling little hair thorns out of my hands the rest of the day. 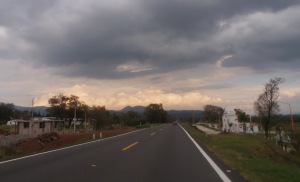 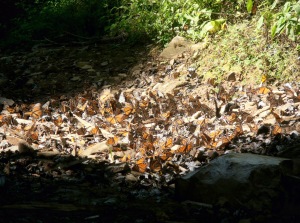 There are five sanctuaries for Monarchs, all pretty close. I went to the largest, up the way from Ocampo 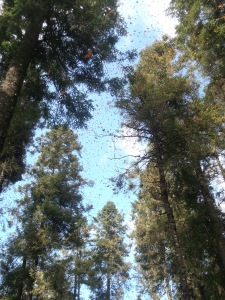 It may be possible with a better camera to effectively convey this place. 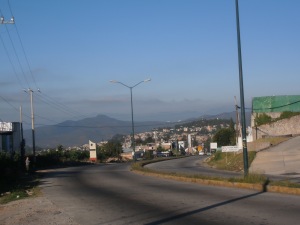 All uphill out of Zitacuaro, which allowed for a fine view of a city I felt no real affection for. It didn’t do me no harm or nothing… 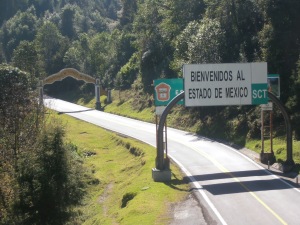 Sometimes the signage is a bit redundant, others lacking. 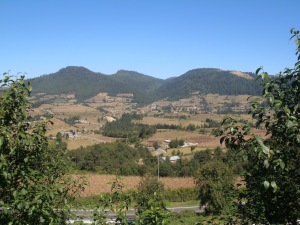 Our continent is kind of funny, in its triangleishness(I know it isn’t exactly)… So big and spread out up north and compact here, I picture it like a funnel, and the flat ground gets lost as it is compressed towards the bottom. I remember being taught in school that North America is just Canada, USA, and Mexico, and have always been a bit confused as to where Central America is supposed to be. Continental lines are physical, right? I think maybe all the Americas move together, even, but I could be wrong. I am sure that Central is not its own continent, is all, and so is probably also North America, I’ll not make any claims in this moment about South.. As for terrain, though, I can only imagine Panama is just a solid line of giant mountains.

1 Response to Tomorrow was a bit of a stretch…