It has been a while again, here is a little about my past month: 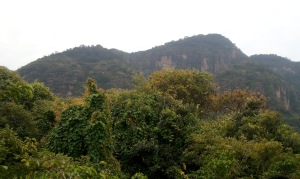 Staying in Chalmita has been alright. It is a pretty area, with relatively clean air and water- it has been nice to have safe tap water to drink again, from the local spring-and stunning landscape. Here is the view from the bathroom.

There is a simple hike up to the top, where the crosses are in that last picture if you look closely, and from there you can see a lot of the valley. 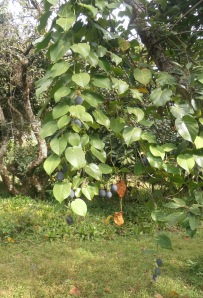 I think these are called passionfruit in English? They are great and I eat lots, along with avocado and guava, of which there is also an abundance. 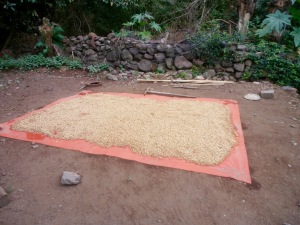 I’ve learned a lot about coffee. We mostly collect the fruits, then the seeds have to be removed from their skins and sit a few days in water, then any remaining “trash” is cleaned off before laying out to dry. So I’ve spent most of my time hanging out with a 75 year old man who has been here doing this for 10 years, and a lot of other things before that. Sometimes I have a hard time understanding the things he says, and sometimes he teases me about that, but it is good practice.

sometimes the tasks at hand seem so many or so grand that it can feel overwhelming just to begin. It is important to stay calm. Plan a little, as simple as choosing a place to start and working in some semi logical order, to the extent that one is available. Set small goals, to break it up into smaller projects. Going in too many directions at once leads to missing things or creating more work in backtracking. Don’t worry about whole, let it get done bit by bit and you may find it is manageable afterall.

I haven’t biked much here. Chalmita is in the middle of a long hill, which seemed pretty daunting when I arrived. Any trip out of town will be a lot of climbing going or returning, but I did convince myself to to out once- to remember that I can go out alone still and that riding unloaded is fun (And the hills much less daunting)! Coming and going from the town is the worst part, on all the cobbled streets, with dogs everywhere.

I did go on some adventures with new friends. This dog hangs out sometimes and has accompanied me some places. 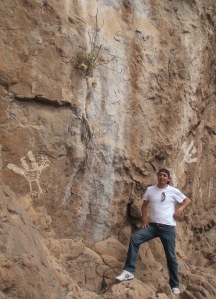 Adrian led me and Sergio, who works here, out to visit these paintings. He has a lot of ideas about their origins, which I think all came from his own head.

He did say that some university people came and said they couldn’t be more than 100 years old, though he is certain that is not true.

Sergio and I went to Malinanco, to visit the archeological site, museums, artist markets, and such.

This is in the church there, a whole room painted like this.

I’m trying to remember all my injuries from the trip so far. I’m pretty sure this is my most impressive bruise, though the picture doesn’t do it justice, and it isn’t even the result of my own clumsiness!

I adventured by bus into Mexico City, which is huge, but not as scary as I expected. Most things aren’t. The center is full of people, though it may have been a calmer than average time to visit in general. 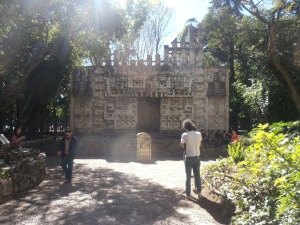 I visited some friends, some museums, and got lost wandering around a bit. 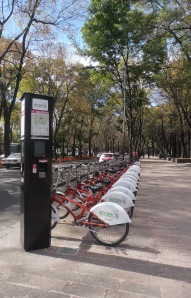 A friend leant me his card to use the system of public bikes, which was convenient.

I returned to Chalmita today, again by bus, and am planning to set out again tomorrow. It is certainly time to be moving on.

It has been a while, and I am sure someone wants to know: this episode of lost, found, and broken brought to you by, if I am honest, the same level of neglect I have employed for things always, but with a little less luck. I am traveling, and so there is not much that I have with me that I can say is unimportant, but I myself without some things that saw a lot of use. In a similar fashion to so many things (setting on my bike instead of putting them away after use, doing something else and forgetting about them, then setting off again) I have lost my pStyle– which is super useful and I recommend to any female bodied people who spend more than part of a day at a time outside ever, or maybe even if you don’t. It is useful to be able to stand to pee on the side of roads and to come away dryish. Not the end of the world not to have it, just a bit sad. I also seem to have lost the cord to charge my camera. You may have been wondering how I keep in touch at all, given my lack of interest in devices of various sorts, but I have been borrowing an iPad, which I no longer have. I have misplaced or dropped many things along the way, but for the first time I have lost some things to theft. Not for lack of trying. I’d like to think I’m generally careful, but really, it is a bit random, and I have left many things I’d rather not lose in unsecured fashion many times. I can ony be thankful I haven’t lost this or, you know, my whole bike with almost everything I own, any time sooner. My headlamp has also disappeared and I can only assume someone wandered off with it too. I am less disappointed about this thing, which while useful, I didn’t actually use too often
(especially when I could read ebooks…).  I finished the bad of soap and toothpaste that I set out with while in Guadalajara. The handful of spoons and forks I’ve found and a few clothes I have aquired from friends don’t do the losses justice, but the most important things have now been replaced to varying degrees.

Really it seems to be only luck that keeps me with any things. I’ll have to make a list of what I haven’t lost some day.

As far as things broken, nothing is jumping to mind except my streak of luck with dogs. It is very common to be chased by dogs when traveling (or just riding around?) by bike, though I’ve been really lucky in this regard, and actually this year, I don’t think I’ve had any give real chase, not past their property line or so, just letting me know… But here, on a simple ride out of town and back into Chalmita, I had a dog come up barking on one side of me, which I ignored, and another ran up on the other side and bit my leg! I had stopped believing that they are actually any threat and while I used to pedal harder and feel scared when large, loud dogs run up at me, I have seen so many now that I hardly respond. I think it didn’t expect to catch me, and ran off after pretty quick. Left a great bruise.

People often ask if I am scared. I usually say something like ‘sometimes, but I don’t think it helps to worry. most people are good, most dogs aren’t going to bite, most bears don’t want to eat humans…’ it varies. I would like to note that I still believe this. I still believe that, though I know inconvenient, unpleasant, painful, and deadly things happen, that there are more good and it doesn’t make sense to live waiting for the bad. There is a difference between knowing you can die or get hurt and proceding with caution, and believing that you will die at any moment and hiding. To the untrained eye, proceding with caution may look a lot like reckless abandon, but please believe that no one in the world has more stake in my continued personal wellbeing than I do.